Week 15 – Ladies 2s lead the way again, with another 3 points

An unrecognisable pitch with suggested parking directly next to the side of the pitch, which would have meant leaping over puddles. Good start to the away match!

Luckily we found alternative parking and our game play went off with a bang with Kirsty and Mollie making their debut in adult hockey. The girls made some brilliant tackles and helped hold off the opposition. As did Freya, making cracking saves and even booted one out, unfortunately hitting Lorna on the foot!

At the other end of the pitch there were moments of excellence (even the umpires couldn’t believe the goals!) resulting in 2 goals by half time – one each for Bridget and Charlotte. We also had 2 injuries with Charlotte looking as though she had punched a wall and Pippa with a painful carpet burn, ouch!

The second half became a bit messy at times with everyone working hard to keep the opposition out. Kareen didn’t want to be left out and popped one in to make it 3-0. Double digits for her already this season! Quickly West Herts got one back making the final result 3-1.

Well done ladies, another win under our belts and a rest weekend coming up!

A good performance from the L1s, with the points agonisingly slipping away as Wapping came from a goal down to clinch the win in the final minutes.

The late game away at West Hampstead, and no write-up this week. Just one goal to report from Jonny Molloy – it was a belter apparently! Maybe.

Wapping couldn’t get a team out, so 3 points to our M1s! 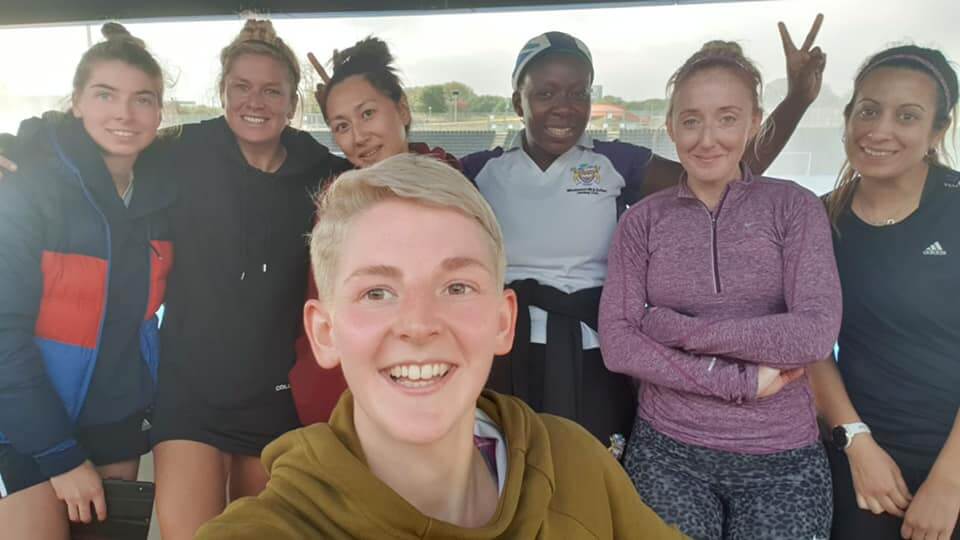 The drama of today’s ladies 1’s game matched the setting. Down at Lee Valley Hockey Centre (think Olympics) we began what ended up being a pure rollercoaster of an hour and a half. The first half we dominated most of possession with Evie and Karen holding strong in the midfield and stretching our play out wide. Defensively Sarah had a few brilliant interceptions and Gemma and Beth were strong out wide stepping in front to intercept and making beautiful runs down the left and right sides. We had quite a few chances in their D but were unable to hit the back of the net, as they only entered our D maybe twice, giving Charlotte not a whole lot to do. Karen and Vicki were relentless in their tracking of players and being options in front of their players.

The second half brought all the drama. We started strong and after a beautiful run down the left wing from Beth, the ball came strong into Evie, who deflected it onto Bethany’s right side. B finished it off beautifully and that was 1-0. We stepped it up for a total of 30 seconds and then had a defensive short corner that scrambled and ended in the back of our net. Charlotte may have kept us in it with one of the best saves we may have seen as a deflection was heading top corner but thankfully Charlotte had the height to knock it down.

Wapping then somehow got another short corner and another scramble led to them scoring again, now up 2-1. The umpire says 4 minutes remain and we are all on edge after playing such a strong match as a team we really didn’t want to have a L to show for it. After some strong play defensively to get the ball up into their D, Bethany put a ball onto their foot and the pressure was on. Shell certainly didn’t want to mess up the pull out, but it was clean and a beautiful stop from B and Sam smashed it bottom left corner! The whistle blew shortly after ending the rollercoaster game at 2-2.

Player of the match: Beth for strong defensive play and beautiful runs down the left wing getting the ball into their D.
Dick of the day: Whoever forgot the balls!

The men’s 1s made the trip to another new venue this week – John Orwell Sports Centre in Wapping, for what looked set to be a session of crown green hockey!

Injuries and illness forced a few last minute changes, with Luke Trevill kindly stepping up from the 2s at the last minute to ensure a squad of 12.

In a fairly even first half it seemed that Winchmore had the better of the chances, only to find ourselves somehow 2-0 down after a penalty corner on the halftime whistle.

But, a confident team talk from stand in skipper Jim Gatting gave everyone the belief they needed to come out fighting in the second half. And within 2 minutes we won a penalty corner which was duly dispatched by Colin Foad (although perhaps not our slickest routine!) to make it 2-1, before Colin slotted his second to make it 2-2 which is how it finished.

A well-deserved point and a really resilient team performance, where everyone dug deep for each other. Congratulations to Aidan on a quality 1st XI debut, plus other notable performances from Jake T at centre back, Asher for controlling the midfield in a very mature way, and Stan for a super effort on the right side of midfield making quality runs and some excellent crosses.

Non-ideal preparation for the game saw our team-sheet of 14 reduced to 11 at push back (and 12 shortly after), with Luke being press-ganged for the 1s at late notice, and 1 no-show. We had the better of the first half, with Adam bossing midfield, and we forced a handful of short corners, sadly all saved by the keeper.

The second half saw us tire as they used their substitutes well, and we lost shape a bit shuffling positions around to cope. Things were still even, and anybody’s game, with both defences looking solid, especially Eray at the back for us, and it remained well umpired even as both teams got nervous, and more vocal(!) as the minutes wore on.

However, a short corner in the last couple of minutes for West Hampstead saw a flick towards the post, and a runner connecting at chest height to knock into the goal. A draw would have been a fairer result, but perhaps an indication that our attacking short corner routine needs a bit more work/creativity…

At last, the ladies 2’s had a home game and enjoyed a bit of a lay in on a Saturday! Although nobody was expecting such a wet and soggy match!

The game started slowly with some of our players getting used to playing in slightly different positions. We were definitely on the back foot as the opposition played well as a team making accurate passes and getting into good positions off the ball. They were 2-0 up but just before half time Kylie made a fantastic run down the line taking on and passing several players before passing it into the D to Abbi. 2-1 half time.

The second half we played some better one, two balls to one another and managed to get a couple of short corners (excellent, as part of our warm up was running a few!). Kareen injected the ball with speed to Jodie who made a powerful strike, which was deflected in by Kareen over the goal keepers head, what a goal!

Still awaiting a win but with a week off and some more training under our belts, there is still hope!!!