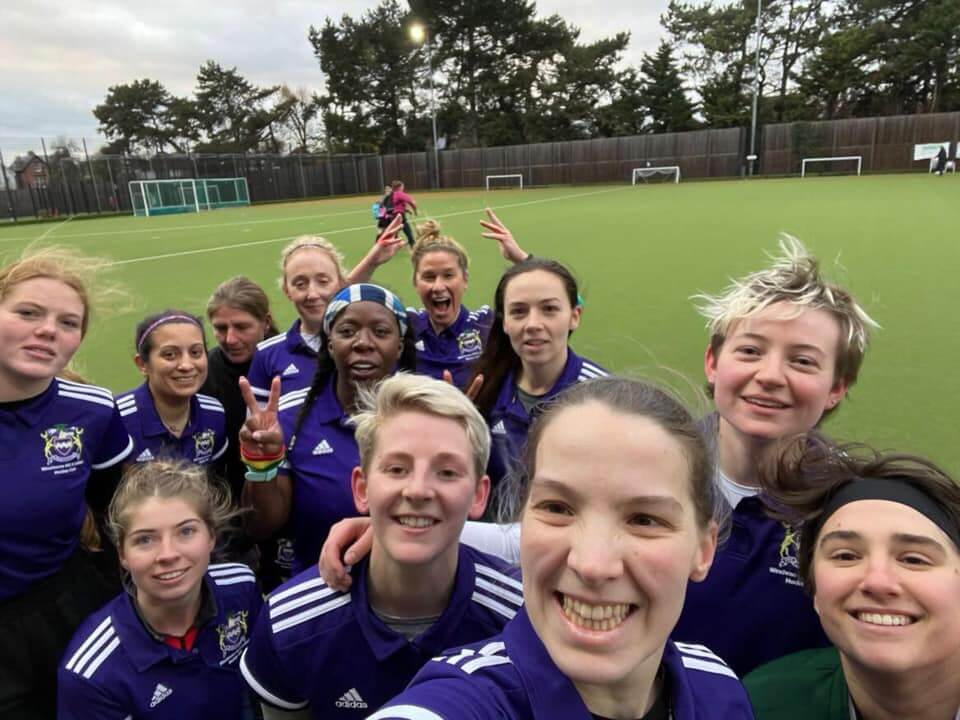 (…though not quite in the way we had hoped…)

It was a chilly (sorry, freezing) afternoon down in Teddington where the ladies in new purple kit were taking on the ladies in pink. The first half saw us playing some strong passes, using our triangles, huge saves from Nic and a few opportunities for us up front. We had 2 attacking penalty corners that almost hit the back of the net but narrowly slid wide.

About halfway through the half, we scored a beautiful goal through teamwork – it started with Gem and Shell at the back, worked through Karen in the midfield, up to Lucy and Bethany and then into the middle where Sam smashed it home. Other than that, Evie and Shell almost took each other out again, Pipps did great moving it up the left with Evie, whilst Karen was always moving and looking for long balls (except when Sam told her off for running too early.)

The second half was a WHE classic. We unfortunately had frozen over during half time and started a bit slow, letting them score one to tie it up. We had our moments of brilliance, with Abbi getting the longest ball ever but we all watched until Nic yelled at us to, ‘GO HELP!’ We held them well and scored another one of our own when Lucy decided to take Bethany’s advice and put two hands on the stick. The first shot was on the keeper’s pads, but she slotted the rebound home beautifully. We then fell into our usual pattern of giving away 29 (exaggerated) penalty corners. On one of these, we cleared but they came back and smashed it reverse stick into the back of the net.

The game was put on pause for an injured calf at one point but other than that it was only moments of -3 winds that froze us. The last 2 minutes were touch and go but we managed to hold on for the draw. Disappointed to not win but a draw in the freezing cold was a decent result.

A game of two strong defences, that thankfully came to end after 70 minutes! It could probably have continued goalless for some time longer…

Walkover to our M1s, after Richmond conceded the game on Friday night.

Another walkover, after Ham & West conceded on Saturday morning.