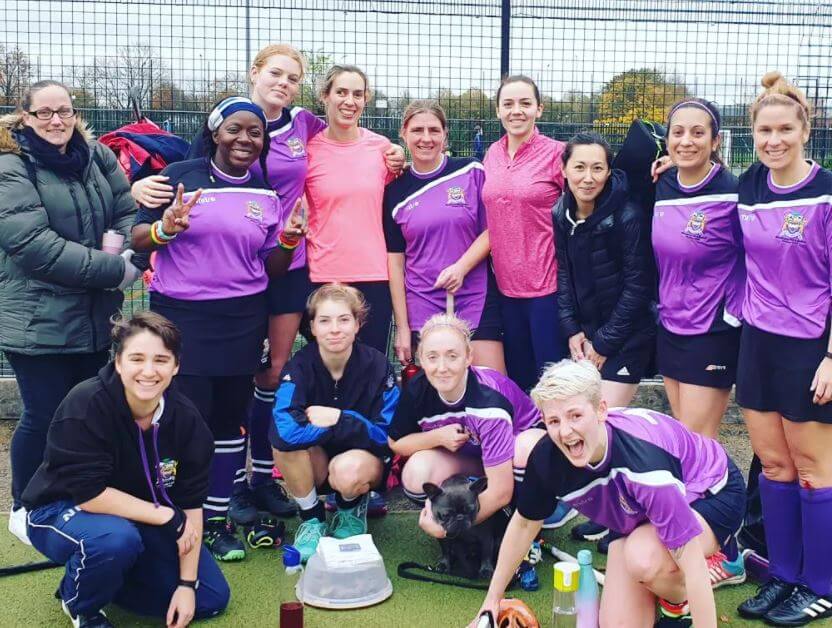 It was the day of the burnt pavlova.

The first 10 minutes we dominated with sexy and ambitious passing, touches and driving into the opposition D. This resulted in a rugby hun conversion of exceptional standard by Sam, Bethany and Shell. Shortly following we had some great work in the midfield by Kazza and Evie that got a few shots off but their keeper was strong and kept it 1-0. The remainder of the first half was evenly played with Nic making some beautiful diving saves, Sarah becoming a wall with her flat stick tackles and Vicks, B, Abbie and Karen up front making some lovely runs into their D. Other than a mad tackle by Shell on Evie (!!), we played a first half full of great teamwork. Gemma found herself in the D and almost made it 2-0 with a strong strike that was denied by their keeper.

The second half we came out determined for a W. We were unable to execute the goal of multiple switches around the back as they were pressing very high but Beth, Evie, Gem and Karen worked beautifully up the sides to move the ball out of our end. We defended a few penalty corners successfully and then the worst happened… a rogue (non- player with not a proper shirt?) dropped out of nowhere and was able to receive the ball at the top of the D and they slotted it in, 1-1. We were fuming. Sam especially decided she didn’t like that score so decided to do something about it. 2 minutes later she received a pass top of the D and smashed it bottom right corner for 2-1. The relief and excitement was palpable.

About 15 minutes left and we managed to keep the W with some strong defending, great work up through the midfield, Gem keeping her cool and moving it up the right and some great runs up front to keep it down their end. The final whistle blew and we had our sexy W, but most importantly the burnt pavlova. Sam for player of the match for brilliant work in the middle, exceptional defending and deciding to smash our win home.

The win came early with a quick trip along the North circular across to Brent Cross with players arriving pitch side early! Now having given the 1’s Abbi that left us with 11 players only but that did not deter us, we were determined to use insider intel to our full advantage and smash the West Hampstead ladies with glee. So it was with pleasure we scored early and kept the lead for most of the game. Terrific 1-2’s, some switching round the back, amazing runs down the middle and wonderful smashes to the top corner – we were amazing as a team! 1 nil at half time and a positive but stern half time chat set us on good path for 2nd half.

After the break saw a bit more to-ing and fro-ing but with amazing trust and on pitch communication we were able to hold pressure on the attacks from the opposition.

Freya’s wonderful top D kick straight back to the opposition was overlooked due to her amazing boot to Charlotte in the mid 25. Which then with solid passing, a few balls on feet from Lisa, and a few breakaways from Kate and Sula we managed to get back on top again. Pippa’a seamless passing back, even when no one was there, kept us all awake (including when Lorna was made to run) thankfully as then they tried to claim a self-kicked goal. But thankfully the ‘umpires’ were actually correct on that call.

Overall a full time score of 3-2 to us had us singing all the way to teas where we were treated to double carbs and mini magnums. A great match had by all, a wonderful team effort and 2 back to back wins behind us ready for next week against Southgate!

Despite Winchmore going into an early 2-goal lead, West Hampstead came back strongly to overturn the deficit and then some, running out comfortable winners 5-2.

The M2s battled hard, but a young and well drilled OMT side were just too strong, leaving our team wondering why OMT 3s had been swapped out of the division above?