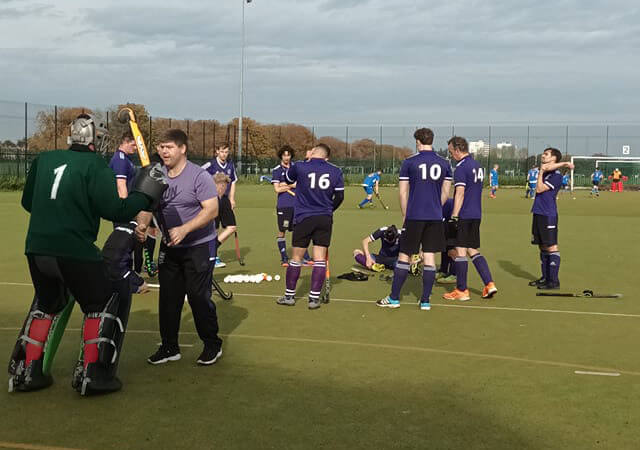 There was a sense of deja vu as the L1s finished their game and the M1s rocked up to take on PHC Chiswick 3’s.

Last time out at the sun-bathed Southbury pitch there were some frayed tempers and toys thrown from prams. No need for the deja vu concerns though. In fact, the villain of the piece turned things on their head and won a well-deserved man of the match this time out! With some top saves, and a command of his D, Josh got 8 MOTM votes – a landslide! Maybe the presence of not one but two Dom’s helped Josh keep a level head? Either way – we were glad to have some new blood and delighted to have our revered Club Chair back.

Ollie (aka Captain Bambi) slid around the pitch and looked like he’d been practising hurling with some questionable ‘aerials’. He only avoided DOTD because Jake destroyed the first aid kit with a panicked under-pressure clearance.

All that aside, the game was hard fought. WH&E nabbed a good goal midway through the first half. A well delivered short corner, with a fiery strike from Joe was turned in with an impressive, delicate, carefully executed edge from Dan. In his words ‘it was a screamer from 2 yards out’. How did he feel about his goal, ‘I’m just so glad to be involved, and I’m enthused and excited to get my first goal of the season’.

Once we’d established the early lead the pressure increased from Chiswick. Their relentless high-press meant two WH&E teammates said afterwards ‘at one point I was counting how many players they had on the pitch’.

Their pressure told, and a sloppy defensive lapse gifted the opposition an equaliser before half time.

Then, a moment to regroup. Much needed.

Half time oranges, an ideal antidote for Asher’s poorly tummy. His words: ‘I thought I was going to throw up – I thought my match was done…’ – ten minutes on the bench and he was back. Good lad.

But alas, our energy lapsed, disorganisation and panic set in and we opened up. That allowed Chiswick to score their second, a well struck shot into the far corner of the net – Jake might’ve deflected it wide, Josh might’ve got a right hand to it, but the pace was too much. 2-1.

15 minutes to go. We turned a corner. Looked like we could grab a goal with some pressure. But it wasn’t to be. Ollie’s rugby tackle on his own teammate, some average defending and it was quickly 3-1. And the end came soon after. We asked Ollie how he felt after the game, ‘a bit gutted, I even self-voted DOTD’.

So, a sad end to a decent run. But a fun game played in good spirits, with two umpires who whistled well. Next week, as Captain Bambi galavants to Milan, hopefully goal-getter-Vice-Captain-Dan will lead us to victory at Hampstead and Westminster. Here’s hoping!

The ladies turned up to Southbury to play Hampstead and Westminster. It was ridiculously hot #globalwarmingisreal.

There was a minor issue…. we all turned up to play hockey but forgot to actually play. One moment of brilliance a lovely link up between Abbi and Vicki in front of goal reduced our deficit to 2-1…. then we decided that was enough, completely forgot how to play hockey and especially forgot which team we’re supposed to pass to.

Final score was a lot more than 2-1. Nic lay on the floor after one of them and after the oppo checked she was OK – she said “I’m just sad”….

We’ve moved on already. Next week a 4pm push back somewhere far away…

MOTM – Karen and Vicki, they seemed to remember to play more than the rest of us
DOTD – everyone else

A trip round the M25 for the M2s for a lunchtime pushback against an experienced Osterley. Calum stepping in for a debut at Centre Back, with a returning Piriyan and Ellis to the starting line-up.

A rough start with two quick Osterley goals from a quick free hit and a subsequent short corner, which was almost blocked off the line by Calum but for an unfortunate bounce deflected it over his stick, followed by a quick counter attack with some clever Osterley play to lead 3-0. Jonny pulled one back after a well worked passing move to go into half time at 3-1.

A solid half-time team talk led to a more invigorated Winchmore, with lots of silky passing from Tom and Theo, creating lots of opportunities and winning numerous short corners. This led to Winchmore getting their second from a crafty short corner routine between John Lappin and our scorer of the second, Jonny with four minutes to go.

Winchmore pushed hard for an equaliser with some commanding performances in defence and midfield, but a last-minute free hit slipped through a stick to an Osterley player 1v1 for a finish of 4-2. A well fought second half which deserved a draw against a technical Osterley side.

A pictorial report from the L2s this week… 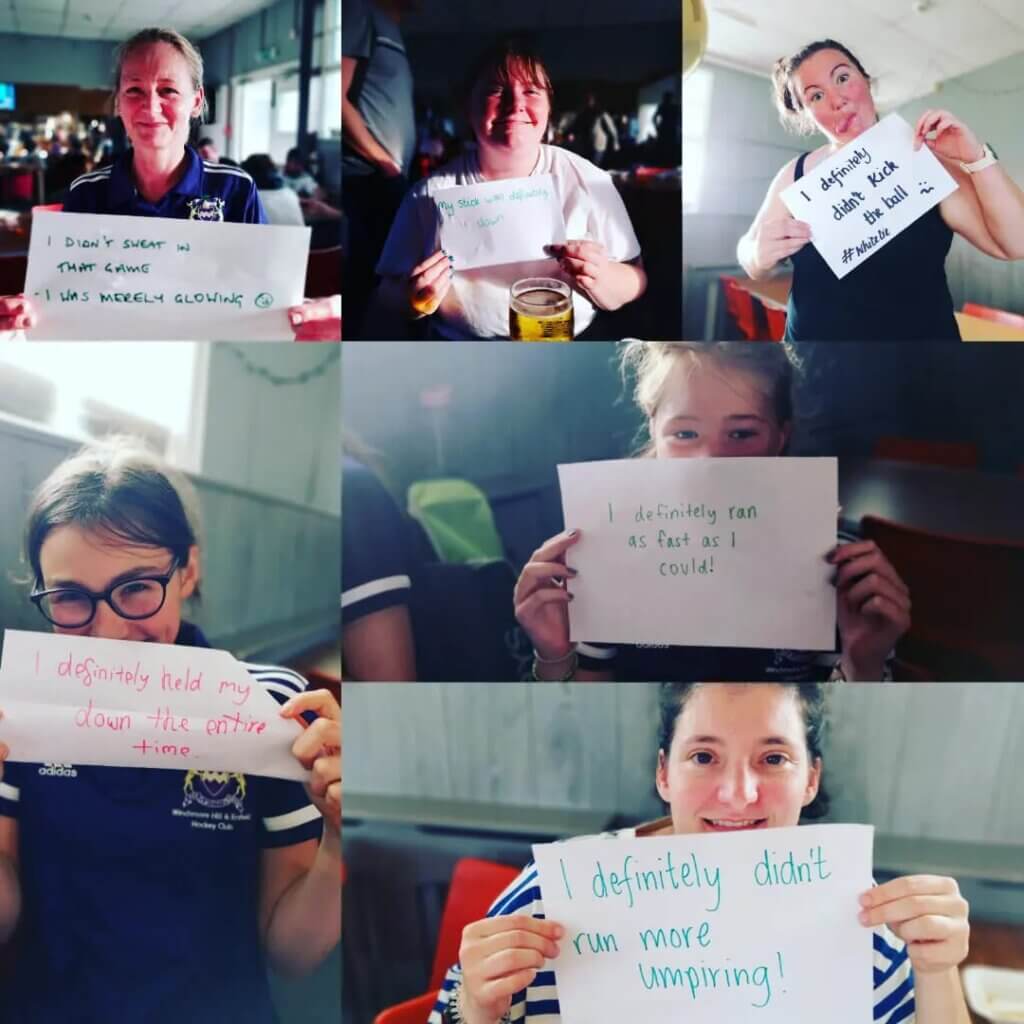 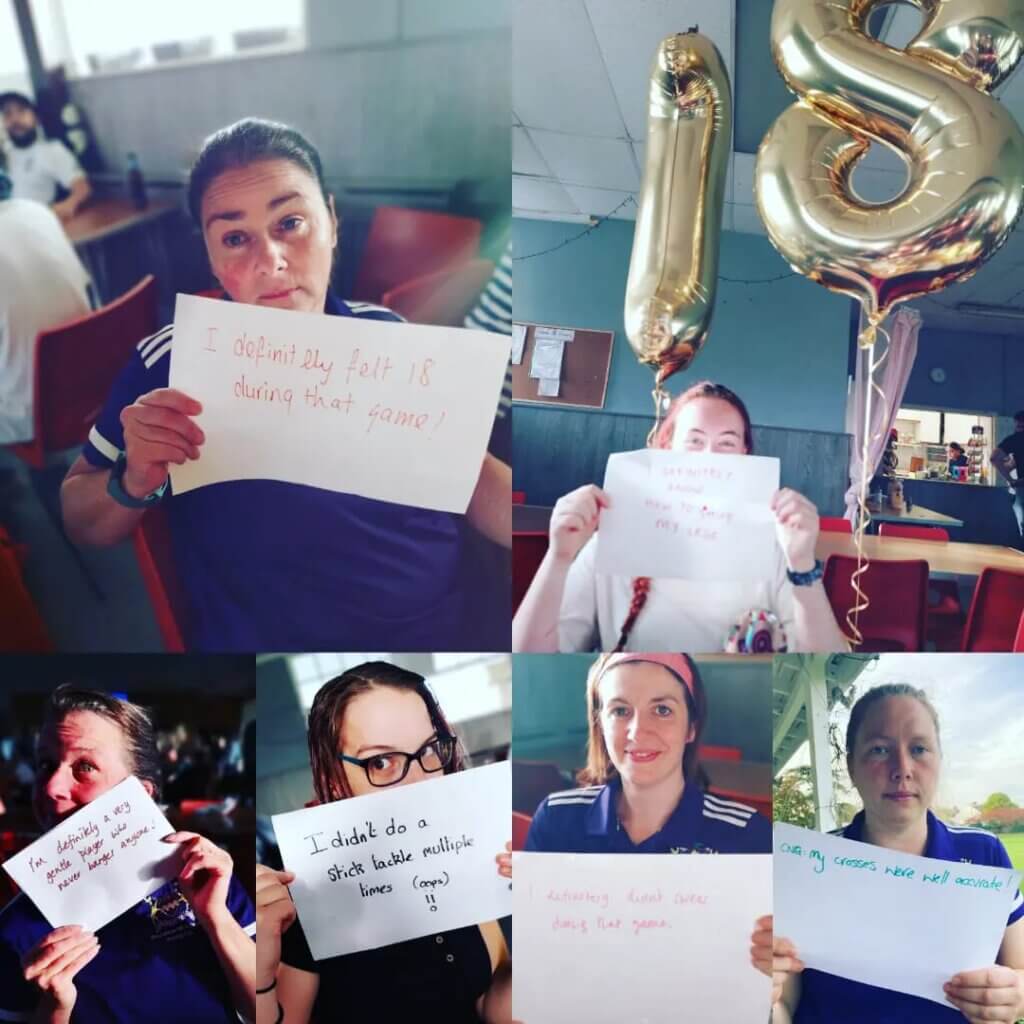