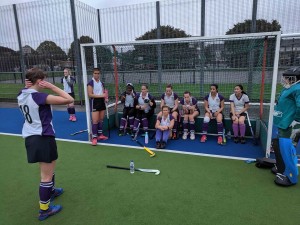 Well where do i start…
Roughly 80 minutes of play
5 goals
3 rugby tackles
1 green card
Which sport were we playing again?

It was a bit of a scrappy match against Hendon & Mill Hill but we came out tops with a 3-2 win ??
The first goal was from Rachelle Alexandra on a short corner, the 2nd from Vicki as part of a great team attack and the 3rd from Beth Deane as part of another great attack.

The support from the men’s and the ladies’ 2s from the sideline was brilliant, thank you!

Woman of the match – honourable mention to Vicki for a beautiful goal and lots of great running. Joint winners go to Shell for lovely defending and great composure during the game (well, more than usual) and first goal ever, and Chris for lots of great saves!

DOTD to Sarah E-Q for hitting herself in the face and still giving away a short. Ladies playing today know who the true dotd is…3 out of 4 games won, what a start to the season Ladies ????

We started this game with a must-win attitude as Bedford Vets were on 1 point and only a place above us at second bottom of the table.

We started brightly and arguably were the better team when a counter-attack by the Vets down the right hand side came – our defender was one-on-one with the attacker who made a weak push, and by a stroke of luck went past the defender who couldn’t get his stick down quick enough. The attacker then received their weak attempt, and slotted home past the keeper. 1-0 down roughly 10 minutes into the first half.

This didn’t discourage us as we had seen our slight advantage in the first minutes of the game. Some moments of magic came as we passed the ball through most of the team before Luke threaded a ball through to Joseph on the right-wing, who pushed the ball to John Lappin at the top of the D. He controlled the ball, one touch inside and let rip a shot – fortunately his shot instantly deflected off a defender’s stick which lobbed everyone inside the box, including the keeper. A wonder goal, luckily. 1-1.

We had additional good spells of play mostly down the left wing, however it was another quick break by the opposing team which led to another goal for 2-1 to the home team. It was then apparent who the standout player was for them.

The team response was great again, as we continued our possession style attack. Up to this point, most of our play was happening through Rob D who was absolutely everywhere – as he started one of our many attacks where the ball entered through the right-hand side of the D again, and the ball was then drilled to the back post, where Theo, kneeling down with the stick on the ground waiting for the ball patiently knocked it in for 2-2!

It wasn’t too long before a similar play saw Theo get passed the ball inside the D, and he skipped past one player elegantly and with only the keeper to beat, pushed it past. The keeper got a slight touch on the ball, so it was a nervy few moments before the ball dribbled into the goal – with Luke around for insurance just in case the keeper managed to stop it. 3-2, our first lead of the season!

Unfortunately we couldn’t hold on, as near the end of the first half, the home team managed to get a short corner. They messed this up but managed to get it to the top of the D where their striker slapped the ball hard and low in the right hand corner – Nick managed to get a touch on it but not enough to for a clean clearance. So 3-3 at half time.

However, the second half was not like our first. We lost our shape a bit as the game became more stretched. They had one player who we realised really ran the show, who kept on hitting us on the counter-attack. Shortly after HT we were 4-3 down.

A fifth goal was similar in fashion in the sense that it was more so a counter-attack, but with the kudos of the opposing team’s fitness as the middle of the pitch opened up leaving space to run into. The opposing playmaker ended up getting the ball into the D before squaring it to a teammate to slap it into the goal. 5-3. Nevertheless, we remained competitive up until this point, with one major chance falling to Luke inside the D to resurrect our second half, who just couldn’t quite hit the ball towards the goal – possibly our best opportunity of the second half.

The icing on the cake for Bedford was another short corner in the dying moments of the game, where they similarly messed up their routine, yet managed to find another great striker who placed it with power yet again, with Nick unable to do anything as it deflected once more from his stick and into the goal making it 6-3 at full time.

MOTM: Theo for his two goals. A special mention to Rob D who was instrumental throughout the game, and whose efforts on the pitch deserved much more. Also notable was John P who had two stints in goal for us too, and played the final part of the game as a winger.

DOTD: Joseph – revealed some questionable food choices to some of the squad post-match.