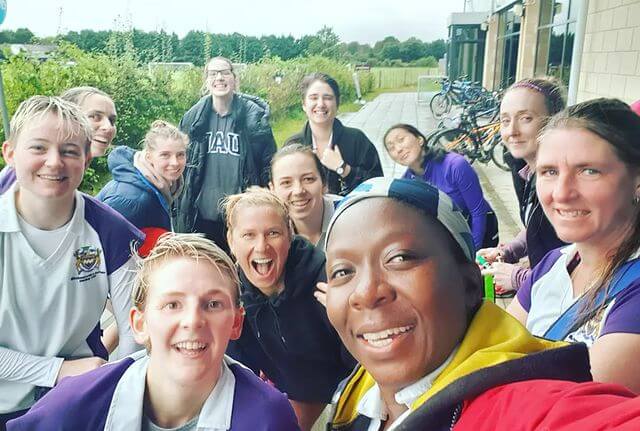 The 2nd match of the season for the Ladies 1s was away on a gloomy Saturday afternoon against Richmond.

Thanks to Lucy Mackay we were able to bring a full team of 11 but had no subs so we knew we were going into a tough one.

We played very strong consistently throughout and focused on setting our press to keep the opposition at bay.

Evie’s league debut was a great one as she battled hard in mid to intercept balls and drive forward to create chances.

A slight lapse in marking led to Richmond getting a goal in the latter part of the 1st half, whilst we had some chances that we were unable to convert.

We continued to fight and play as a unit to create more opportunities. With some questionable passes from Shell, we endured moments of pressure but did a great job of regaining composure and staying in our shape as a team. The second half saw us with an abundance of chances and finally we were able to convert as Sam dribbled into the D, passed across the P spot and Bethany converted it into a goal!

The game ended with us taking Dom’s advice and whacking it into their 25 so Sam could f around for 2 minutes in their corner. Poor Vicki unfortunately received a deflection to the lip on the last hit of the game. Luckily though mummy hasn’t lost any teeth.

Altogether, it was some very solid team effort ending in a 1-1 draw. Bethany was player of the match with her strong runs down the wing, driving into the D, goal, and her breathlessness at half time!

The game was a match of two halves with two different winners! Medics came out with 11 on pitch and we were 1 player down with 9 on pitch, until Jodie joined us part way in. The young, fit and skilful medics popped a few goals in the first half, we were 4-0 down but we regrouped and came back with a vengeance!

After a bit of reorganisation and composure we played better as a team linking passes down the pitch. Abbi opened her account after some quick passing down the left and a dink out to her. Bridget was there on the back post to make sure but wasn’t needed this time!

We had gathered some momentum and Charlotte fought her way through the Red Sea of medics, crossing it in to Abbi finishing the second half 2-1.

An overall 5-2 loss but some positives to take forward to the next match.

A really great opportunity to play at a top venue in Lee Valley Hockey & Tennis Centre.

It was a shame we didn’t play on the stadium pitch. Indeed we did panic where our crowds of fans would now stand. I guess they watched the indoor tennis when the weather turned.

A slightly different look to the team with M1 debuts for Dan Mather and Jake Tasker. Slotting into a new team is not always easy but the guys made an amazing contribution.

Against another new and unknown opposition we did well to maintain possession. We were less under the cosh with more numbers in the midfield (good advice from our keeper extraordinaire and vice captain). We also played it round the back well. Stretching the opposition who to be fair worked hard to keep their shape and press well.

It was fairly even and we had some D penetrations and shots from Harry Stone.

It could have gone either way and unfortunately East London scored from some good individual play.

This made the job harder as possession alone was no longer enough. We made a go of it and had a shirt corner. Up front we looked more threatening with the combination of Harry’s jinking and Dan’s runs.

We don’t celebrate losses but definitely better this week, anyone could have a mention for their efforts, game played in a good spirit and discipline/respect towards the umpire. It is clear we can compete in this new league. So onwards and upwards next week at home and a more typical start time.  10:00am start was another new experience today.

It was a miserable rainy day as the M2’s faced an Indian Gymkhana 5’s side at home. Paul was making his debut for the team, but had to wait as he was starting as a sub.

The game started and it was fairly even for some time, going back and forth with the play. The Gymkhana’s were well drilled and whilst not better physically than the 2’s, they had better stick skills. It wasn’t long until they started to outplay us and we found ourselves 1-0 down, soon followed by 2-0 down.

Following the end of the first half, we found ourselves 3-0 down. Despite their superior stick skills, they couldn’t configure how to take a short corner which was fortunate for us.

In the second half, it was much the same. Gymkhana’s stick skills seemed to overpower our own play, to be soon found out as they went 4-0 up. We were not disheartened by this and soon found ourselves breaking through on the left, with James Orr who dribbled past two players, smacked it in the box to Luke, who dragged the ball to the left, chipping the keeper, 4-1.

We did start coming back into the game as we seemed to have more regular attacks as the pitch got stretched, however it was one of their breaks which made it 5-1. We managed to get a second however after some glorious team play down the right involving half the team ended up with Luke slotting the ball through the keeper’s legs – the commentary doesn’t do it justice, but special shout out to Paul who was integral in this move.

Gymkhana ended up getting two more goals to finish 7-2, but between this is where more action happened. We had a free hit at the 23, when one of our players tried to ‘hurry up’ the opposition and moved them away from the ball, which resulted in the players squaring up and some unnecessary handbags.

A challenging loss for Winchmore, an intense game – and a big thank you to Dom & Jason who took time out of their day to umpire a circus of a game.