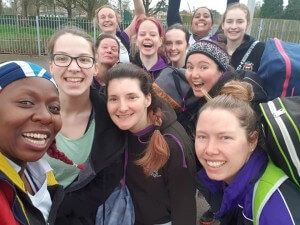 So, 10 players and Sarah (doubling up) travelled to face a Teddington team with 5 subs!

It was a bit of a unprepared start with 3 of us arriving just before push back, but we had control from the start and were rewarded when Anju tapped one in from close range after Erin slipped it past the keeper. The rest of the half continued much in the same way, but Teddington always looked like they could pop a sneaky one in.

In the second half, we enjoyed a lot of possession but couldn’t convert until Gem Luckman scored a lovely short corner followed quickly by Erin getting her own tap in from a long shot that slipped between the keeper’s legs. It finished 3-0.

Honourable mentions to Kate and her “magnetic stick”, Erin for getting on the end of things, Anju for a lovely ‘stop,turn and shoot’, Sarah for just making it and the whole team for ignoring the shouts of “They’re getting tired” and (even worse) “I need a sub!”

A makeshift men’s 1s made the trip to Shefford & Sandy for a rearranged fixture after the first attempt was called off in January following a nasty accident which closed the A1. On another windy afternoon, the young Winchmore side battled hard against the wind, but went into the break 4-0 down. Not to be deterred, we came out fighting in the second half and showed more of what we can do, scoring twice and taking the game to Shefford & Sandy for periods of the half. Final score a 6-2 loss, but a fine effort for a very inexperienced team.

No match for the M2s this week