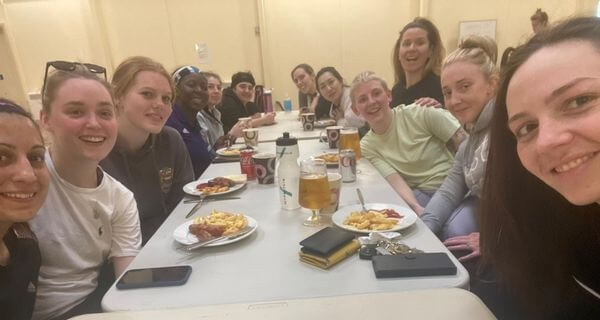 The M2s had a successful Saturday with a 6-1 victory against Eastcote Eagles. The first half saw us pose a constant threat, with strong pressing, and building from the back with good spreading of the ball to the wings. Paul opened the scoring (his first for the club) following a rebound off a short corner, and Theo and Jonny pounced on loose balls in the box for three more, while Calum claimed one from a short corner – he struck it, it went in the corner, and I was facing the wrong way to see any deflections!

“More of the same in the second half” we said, but it didn’t work that way. Eastcote left more players up-field, posing more threat on the break, but somehow the fewer defenders made a better stab of keeping us out. Our defence stood firm, apart from one unfortunate intercepted clearance. As a result, Joe came up to claim a late short, and power home our sixth. A rest week up next, followed by the table-topping Merchant Taylors. Let’s take this form into the game against them…

It was always going to be a good day once the Ladies 2s realised that while England were at Twickenham, we were not!

We started well, as usual there was some lovely play round the back, and we kept the ball overwhelmingly up their end. Our first goal started from the back, with great passing all up the pitch finishing with Kylie slipping in between the goalkeeper’s legs.

1-0 at half time. We had a cushion but knew we needed more before we could relax. (Such a top quality game that at half time both captains had to be taught the basics for sideline balls to pass on to the rest of the team!)

Harrow’s tactics of leaving their attack sitting high put some strain on us with two defenders having to stay back, but in marking one we managed to get Lorna over the halfway line for a change. Not long in to the second half Kate slotted it through to Kareen who did a lovely turn and popped it in. 2-0. We defended three short corners in second half, one from a clearance by Nellie into Abbie’s foot. All three brilliantly defended, and a clean sheet maintained.

Another game won in a surprisingly long line of wins, leaving us second in the league (although how long that is maintained remains to be seen).

Concise report from the Ladies 1s:

We went to Eastcote
It was really sunny
Abbi scored
Then we lost
…And then we all ate teas and Evie discovered our #hockeyfamily tree!

No match again this week for the M1s, after the scheduled opposition pulled out of the league ☹