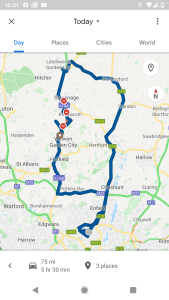 The league season returned after the Christmas break, but not as we might have hoped…

The Men’s 2s gained a much-needed 3 points with a 4-2 win over Shefford & Sandy 3s, albeit with the visitors with 9 players and no goalkeeper due to travel problems on the A1(M)…

The Ladies 1s battled hard but went down 2-1 away at Eastcote.

The Ladies 2s were awarded another 3 points as their opposition (Ashford 4) conceded the match – the fourth time this has happened to the L2s this season!

…and finally the Men’s 1s had the game that never was away against Shefford & Sandy 2. One carload stuck in the chaos of the A1(M) being shut due to an accident, meant that only 7 players (and no goalkeeper) arrived in time for the match to start and the game was abandoned ☹ Hard to know who was more unhappy, the players who made it there but didn’t get to play the match, or those that spent 5 ½ hours in the car!

Hopefully normal hockey (and match reports) will resume this week…