The match started well, with a goal scored in the early moments of the game – from the first short corner – by Dan. With the confidence of being one nil up, we continued pressing and another goal was inevitable, and Theo got his first of the game (with a little help from the opposition keeper who nudged it in past the line by accident).

Midway into the first half and a 2-0 lead was very promising for the final score. The attack on the Harrow goal was relentless, with everyone participating and playing superbly. Jonny, Tom, Guy and Calum in midfield kept the ball pushing forward to the strikers, with the defenders only being used to pass back and around the opposition – who didn’t have a look in towards our goal. And quickly after the 2nd goal Theo converted another after being gifted the ball right in front of the goal by a scuffed Harrow clearance to make it 3-0.

Towards the end of the first half, Dan scored another great goal (his second of the game) to increase our lead to 4-0. The Harrow defenders were constantly working and another slip up at the very end of the first half meant a short given as the final play. The initial shot was saved, but it fell to Theo at the edge of the D, who caught it nicely and drilled it bottom corner, for his hat-trick!

We switched things up slightly for the second half, but things continued to go our way, and after a few dubious efforts from Luke (who at one point missed the goal by about 15 metres!), he scored his first of the season to make the lead even bigger, at 6 goals to nil. Eventually, and practically the only time in the whole game, Harrow managed to get by our defence and John lost his clean sheet when Harrow hit one in the bottom corner.

But we still had fight left in us, and James dribbled past their defence, to score the last of the game. When the final whistle blew, another last second short corner was awarded, but this time less successful with no goal being scored. The game ended with a resounding 7-1 victory.

A new season, a new coach, a new league in a new area, so for the opening fixture the M1s played West Hampstead, our new friends from the summer league.

With a last minute change of plan following a no show from Stan, there was a system failure, and I’m not referring to the GMS!

West Hampstead put the pressure on from the first whistle, making it difficult for WHE players to have any time on the ball. The opening goal was scored when a defender stepped in front and intercepted a pass to forward Harry Stone, who was on the halfway line, and they worked the ball into the D, before flicking in off the inside of the post to make it 0-1. A second was added before half-time after the ball struck Dominic Smith on the foot and looped up over the defence, dropping to a forward who diverted it with his reverse stick past the onrushing keeper James Gatting.

0-2 at the break, a couple of changes and WHE made an encouraging start to the second half, however a well drilled opposition had control of the match, and scored a third in the last few minutes with a close range deflection. Final score a 0-3 defeat.

With the M2s winning their opening game 7-1, some players might already be knocking on the 1st team door, meaning there is new healthy competition for selection at the club. In a few weeks we could be seeing a new look 1st team, and I’m not just referring to the kit.

Thank you to umpires Samantha Lucy and Beth Deane.

* this report was held up due to many hours of editing and censorship (by the author!). 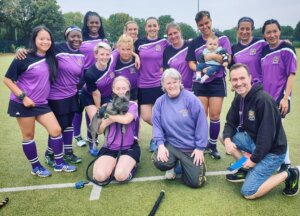 The Ladies 1s were unlucky to lose out to OMT 1s with the visitors converting a penalty corner with the last play of the game. No match report, but a nice team photo!