Week 18: So first it was raining again. Ladies 1s started well against #topoftheleaguein the 2nd minute. 1st minute we were caught out by a very quick attack and conceded. Whoops!!! 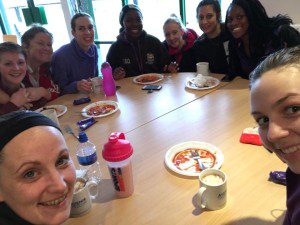 Two more slipped past but we didn’t let it get to us and came back to a beautiful well executed and planned short corner… first goal for captain Samantha of the season. A second well executed short corner by Karen Goode and Gemma put the score at 4-2 (they scored at some point). We scored a third goal by an excellent #deaneteam link up to put the ball from a long corner into Caroline who took an amazing touch to beat the keeper.

It was the most goals Harrow have conceded in a game all season and the most we’ve scored in a while.

Man of the match goes to #teamdefence both Sam and gemma for being generally awesome.

Another record was broken today too, Rachelle didn’t get dick of the day!!! Instead that goes to Sam for trying to kill Gemma with her face mask when throwing it off the pitch after a short

sorry about that gem!

Bring on Eastcote 3s next week!!

Men’s 1st team had a hard fought battle against Hertford. A goal from James Gatting gave a slender and precarious 1-0 lead at half time. Giving Hertford too much time on the ball and a few missed tackles saw the scores levelled 1-1. Luckily WHE returned to some form, piling on the pressure with attacks and short corners. Eventually Hertford resistance was broken with a short corner follow up to seal a 2-1 win. A great result but room for improvement against local rivals Southgate Adelaide next.

Man of the match performance by Nick Smith in goal.

Many thanks to Dominic Smith and Chris Moran for umpiring.

The men’s 2s continued their winning ways on Saturday with a solid 2-0 win against a spirited Shefford & Sandy side. On a grim afternoon, it was always going to be a war of attrition, and neither side created many chances in a tight first half. However a tactical change at half-time by captain Joe Small, saw Eray and Grant pushed forward in an effort to capitalise on possession and this proved to be the turning point in the game. With more attacking threat, Winchmore put the visitors under increasing pressure and this paid dividends when Dominic picked up the ball on the right side of the D, before shooting high into the top left corner to put the home side 1 up. The second goal followed 10 mins later, when a well worked short corner was switched back to Grant who swept it past the keeper from close range, but injuring himself in the process! The visitors fought hard to the finish, coming close to scoring from their only penalty corner of the game with 2 mins to go. But there was only ever going to be one winner, and Winchmore keep up the pressure on the league leaders with only 4 matches to go!

Many thanks as ever to Chris Moran and Dipak for umpiring, when I’m sure watching the rugby in the warmth would have been preferable!