Week 13: Twas the match before Xmas… 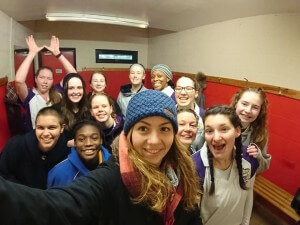 Twas the match before Xmas
When all through the club
Not a member was stirring
Except us and a sub(!)
The stick bags were hung in the dugout so fast
With hopes that their goalie would let a few past

The second half was much colder, “Mine” called Charlotte and with a great smack
Sent the ball into Ellie who slotted one back

A final short corner to finish the game
And Chris whistled and shouted and called us by name
Now Pippa! Now Sula! Now Erin and Mia!
On Caitlin! On Charlotte! On Romy and Freya!

Now on to the matter of the league and given this score
What a great Christmas present, we’re now number four!