After the February round of fixtures was cancelled due to snow, normal service was resumed for March with the Girls U12s heading to St Albans and the Boys U12s at Potters Bar, whilst at Southbury Leisure Centre we hosted the Boys U14 tournament. Check out our tournament reports below. 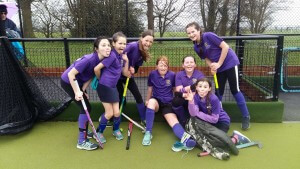 Our girls under 12’s team travelled to St Albans this morning for the latest Junior Herts league tournament. We had no subs and the rain was pouring down but it did not dampen our spirits.

The first match was against Harpenden. We mostly kept our shape and attacked with gusto and were unlucky to concede a goal. Second game was against a strong Royston B team, we defended multiple short corners and conceded 2 well taken goals.

Our heads did not drop and after a change in formation we took on Broxbourne and produced a goal! A stong run from winger Harriet passed to Kirsty who fed Isabel for the shot. Broxbourne equalised and the match ended in a draw.

Our final game was against Blueharts. Buoyed by our last match we started with passion. The well drilled Blueharts team were strong in attack and we were strong on defence. We held them to a 0 – 0 draw.

This team are continuing to grow in confidence and skill. Harriet, covering the entire pitch with endless energy; Molly, so solid at the back; Elize, always running into space; Kirsty controlling the midfield; Emily, super fast on the wing; Mary, tenacious in defence and Isabel, with her great ball distribution. Lots to build on for the future.

The boys U12 team headed out to Potters Bar today for the latest round of the Herts junior League. A cold, wet and windy morning did not seem to bother the kids (unlike the adult spectators!!) as they took on the usual suspects from Royston, Blueharts (x2 teams) and Hertford.

The boys battled hard in all the matches, and performed particularly well in games 2 and 3 against Blueharts Pumas and Hertford, taking the game to the opposition and creating several good scoring chances in each game. However, the luck was not with us today, with shots being deflected wide or being saved by a sprawling keeper, and our boys were robbed of a deserved point after a last minute breakaway goal from the Pumas.

Lots of great performances throughout the team – Joseph with some great goal line clearances, William solid tackling and hits up field, Thomas winning the ball back in defence and midfield, Harry bringing the ball out from the back to support the midfield, Ben using his skills and speed on the right wing, Sam working hard on the left of midfield, Zafar’s skilful dribbling through the middle and Siva a live wire in midfield and attack, always wanting the ball.

The boys have made some good progress this season, but so have the opposition teams, so we need to keep working hard on our teamwork and I’m sure the results will come.